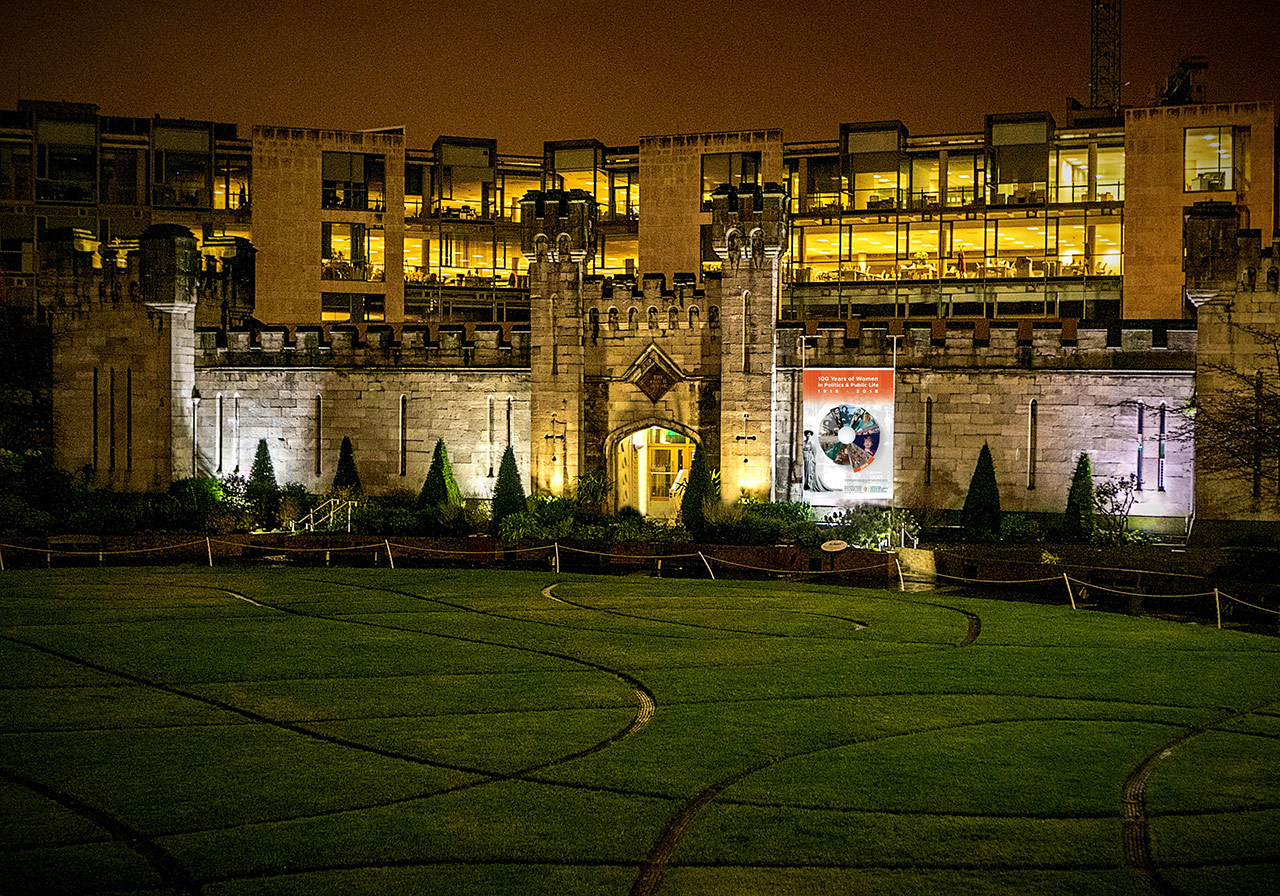 This exhibition is part of Ireland’s Decade of Centenaries programme, which runs from 2012 to 2023 – commemorating the significant historical events that occurred leading to the foundation of the Irish State.  This Pop-Up Women’s Museum – 100 Years of Women in Politics and Public Life is an exhibition which looks at women and their role in the formation of modern-day Ireland, one of the oldest surviving parliamentary democracies in Europe

Using a selection of images, films, interactives, objects, and costumes, the exhibition guides the visitor through the journey of women at work – their clothing, bags, election material, desks and writing implements, which change through time. Each section traverses a decade, with timelines that give the viewer an over-view of events and legislation that affected the lives of women.

The exhibition opened to mark a centenary moment in 2018.  1918 was a landmark year for women in Ireland and Britain.  The Representation of the People Act, passed by the Westminster Parliament that year, gave the vote to women, aged over 30, who were university graduates or those who met a property qualification. Later that year, the Parliament (Qualification of Women) Act allowed women to stand for election on an equal footing with men. This pop-up commemorated the introduction of voting rights for women and their right to stand in parliamentary elections. The only woman returned in that election, representing Dublin, was Constance de Markievicz.

The Pop-Up Museum illuminates the stories of over 206 elected representatives and other Irish women pioneers who have contributed significantly to Irish political life and public service since 1918; and examines the challenges they faced and the obstacles they overcame.  For this exhibition, unprecedented access was generously given to the personal and previously unseen archives from Irish Deputies, Senators, Members of the European Parliament and other women activists.  Their stories have never been told before in such a holistic, personal, accessible, and engaging format.

The Pop Up Museum is one of 48 initiatives and part of a network of museums comprising 96 physical and 21 virtual museums worldwide that focus on women [The International Association of Women’s Museums] This is the first time that a dedicated ‘women’s museum’ or a women’s centred exhibition has toured across a country.

One of the great strengths of the Pop-Up Museum is its flexibility – for each venue, the Commemorations Unit in the Department of Tourism, Culture, Arts, Gaeltacht, Sport and Media, worked very successfully in partnership with the local communities to tailor the content and focus to engage local audiences.

The Pop-Up Museum opened in Dublin in December 2018 and travelled to the 4 provinces.  In Munster, it was showcased in Limerick City and County Council’s Istrabraq Hall.  It then moved to Ulster, to the Donegal County Museum in Letterkenny: Then it was displayed in the Roscommon County Council Offices in Connaught before finally returning to its original home in Dublin Castle for a second run.

As you make your way through the exhibition, the exhibits tell the story of key moments in the lives of women, such as The Sex Disqualification (Removal) Act 1919 which allowed women enter the professions for the first time.  Items belonging to Ireland’s first women lawyers are on display. The span of time over100 years is illustrated with a display of the wigs and gowns belonging to Ireland’s female Chief Justice, appointed in the past decade.

Events from each decade are described in the panels for each section.  In the 1920s, items include a uniform from Cumann na mBan, a women’s organisation that took part in the campaign for independence. Members of this group were imprisoned in large numbers in the Civil War.

In the 1930s, in a period of economic hardship; women did not sit at the Cabinet Table. Women groups, such as the Women Graduates Association, fought for women’s rights and against the wording of the Irish Constitution of 1937. The Constitution enshrined women’s place in the home. During this decade, laws were enacted which would affect women’s participation in the workforce for decades to come.

During the 1940s, in the Second World War Ireland remained neutral. Many Irish women left to participate in the war effort. Some went to work as nurses but there are records of many other roles, including Irish born women who became airwomen in Royal Air Force (RAF).

The 1950s saw mass emigration from Ireland due to economic difficulties. At this time, there were only a small number of women in political life. That decade saw large numbers of women entering religious life, with nuns playing a major role in State administration – running schools, hospitals and other institutions. The census recorded that 90% of the population gave their religion as Catholic. In the 1960s, US President John F Kennedy visited the Irish Parliament Dáil Eireann and a film of this occasion is included in this exhibition.  – there were only three women in the Irish parliament, Dáil Eireann, New female members (known as Teachta Dála or TDs) entered the political arena but as the decade ended, there were only four women elected to serve as public representatives.

In the following decade, the Women’s Liberation Movement came to Ireland, despite the banning of some books and magazines.  The central focus of the 1970’s display is a dining room table and chairs, evoking women working from home, with a display of the literature and material from the organisations set up by women for women in Ireland during this period. In that decade, Ireland joined the European Economic Community and women civil servants were granted equal pay with men. Progress in the political arena was slow.  New political organisations were set up to encourage women to enter politics.  Their slogans included ‘Why not a Woman’, encouraging voters to vote for a woman. This campaign was rolled from across party lines.

By the time the second woman, Máire Geoghegan Quinn, was elected to the Irish cabinet, it has been sixty years since the election of Countess de Markievicz.

In the 1980s, the recruitment of women to the Irish Army began; the first female driver to drive a bus in Dublin was appointed; and female judges in the higher courts became a reality. More women entered politics – the costume on display was worn by Minister for Health and Social Welfare, Eileen Desmond, the most senior female Cabinet Minister to date.  Minister Desmond chose an outfit by an Irish designer based on Irish traditional costume of a skirt and shawl, in Irish tweed.

In 1990, the people of Ireland elected their first female President, Mary Robinson. This display includes a campaign sweatshirt and campaign badge. Before the decade ended, the second female was elected, President Mary McAleese, who served two terms from 1997-2011.  In 1992, a book was produced to celebrate the election, for the first time, of 20 women to Dáil Eireann. New women entered politics and public life – panels show the who’s who of women who shaped Ireland.  The first female Tánaiste, (Deputy Prime Minister), Mary Harney was appointed.

The exhibition tells the story of the final two decades, 2000-2018, in a specially curated film that records not only the election of women, but also the stories of women who succeeded in other fields, such as Clare O’Leary, the first Irish woman to scale Everest and to win a gold medal in the Olympics for boxing Katie Taylor.

The physical pop-up museum exhibition was designed to walk the visitor through our history – up to the present moment and looking ahead to the future, – to new women leaders, new challenges, new opportunities, more diversity, and new possibilities.

The Department of Tourism, Culture, Arts, Gaeltacht, Sport and Media has also created a narrated virtual tour of the exhibition.  You can view the tour here.

You can click within any segment of the dial to explore a unique perspective on women’s experiences in modern Ireland – decade by decade.  We hope that you enjoy it.

100 Years of Women in Irish Politics and Public Life

Enjoy this Virtual Tour of the Pop Up Women’s Museum. 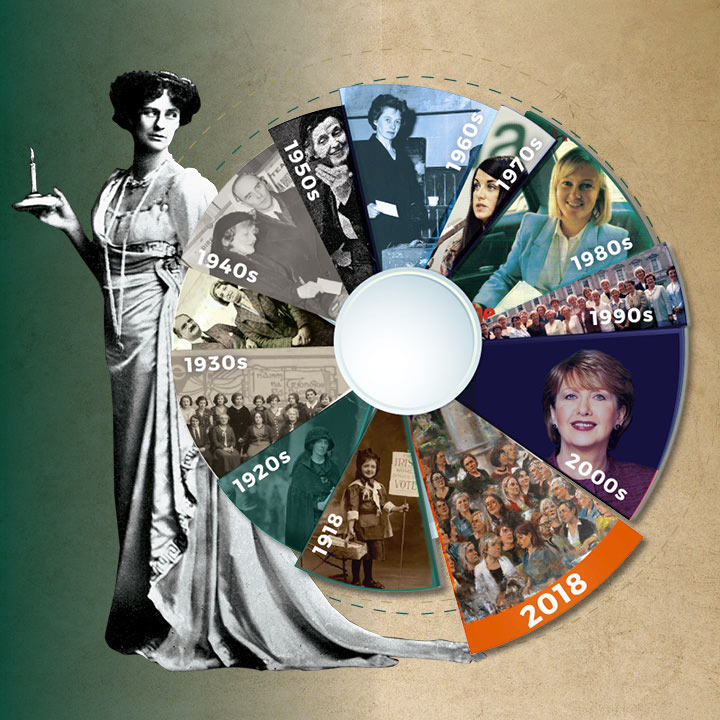