Welcome to www.mná100.ie – an initiative of the Decade of Centenaries commemorative programme to document women in our history, particularly their contribution during the Irish Revolutionary period, 1912-1923.

One of the great legacies of the Decade of Centenaries is a richer understanding and appreciation for the important role of women in shaping our journey towards independence and self-determination.  As we navigate through the most complex and sensitive period of commemoration, which includes the centenaries of Partition, the Civil War, and the Foundation of the State, I want to ensure that this important work continues.

My objective is to highlight the experiences and influence of the women who lived during this period of immense change.  Some are well known and have contributed significantly to Irish political life and public service. The voices of others have never before been heard or have long since been forgotten.  I am delighted that they are now taking their rightful place in our history.

It must be acknowledged too that women suffered loss and violence during this period.  The State’s role is to set a measured, inclusive and sensitive tone; to faithfully present our history, even when the historical record is distressing.

New research, scholarship and archival discoveries have enhanced our understanding.  www.mná100.ie will showcase new collaborative initiatives to shine a light on women’s participation in political, military, professional, and domestic roles, including stories and material previously not accessible to the public or widely known.

As we reflect, a century later, we know that these women of our past looked to a future when women would take on the world as equal partners.  I am very grateful to all of our partners, who have contributed so generously to make this material engaging and accessible for new audiences.

Through Mná100.ie we will introduce you to the stories of the Irish women who took part in events 100 hundred years ago.

During this Decade of Centenaries, a new version of this period in Modern Irish History is being written; one which is more complex, nuanced and inclusive, facilitated by the primary source material being made freely available online and private collections being made public. We are finding out more about women’s lives and their contribution to this period in our history; particularly those who took part in the campaign for independence and Civil War, and also those who served in politics and public life in the period that followed.

Throughout the Decade of Centenaries, there has been a renewed impetus to democratise access to primary source material. Vital records are now easily accessible free of charge, including the Military Archives records. Many other organisations and institutions, including the National Library, Military Archives, National Archives, libraries, archives and museums across the local authority network, local history societies and heritage centres, have embarked on significant digitisation programmes which have enabled access to a rich store of information relating to this period of our history. These records have made the job of the Historian of this era so rewarding and especially illuminating for the story of the rank and file and for Irish women’s history, and they have also enabled access by members of the public to this rich store of material.

We also acknowledge the generosity of the many descendants of those women who took part in this seminal period in our history and who have given access to their private archives – treasured family photographs, letters and personal memories – some of which are shared for the first time on this website. New primary sources provide a unique insight into the lives of these women and allow us draw out their stories to ensure that the contribution they made during the revolutionary period is remembered.

On this website, you will see the ‘100 Year Journey’ that Irish women have taken, documenting the actions of individuals and the collective actions of groups. Cumann na mBan and Cumann na Saoirse in the 1920s. Mná na Phoblachta, the Blue Blouses, in the 1930s. The Irish Housewives’ Association and the Lower Price Council of the 1940s. From the National Association of Widows formed in the 1960s, to the Women’s Political Association, as well as other groups such as Cherish, and Irishwomen United, formed in the 1970s. In the 1980s and 1990s, many groups began to formalise their structures to obtain Government funding, such as LOT (Lesbians Organising Together). In the last decade of the 20th century, the Houses of Oireachtas and the Group of 84 formed to agitate for women in politics. In 2010, the 50:50 Group was formed, with the sole objective of achieving equal representation in Dáil Éireann, which is still an aspiration.

During this passage of time there has been a massive sea change; from 1912 when women did not have the vote; to the late 1930s when Bridget Mary Rice, T.D. for County Monaghan, was for a period the only woman on Government benches; to the roles women have today, not alone in politics, but in the Civil Service, the Judiciary, and heading up State bodies and State institutions.

The slow progress of change for women is something that we associate with the early part of the 20th century in Ireland, as was also the case in many western countries. It makes you think of the speed of change that we’ve experienced in the last Decade. Across the world, over the past ten years, we’ve seen a substantial increase in the number of women who are recognised as leaders in their fields. Various initiatives and campaigns continue to this day, to highlight the causes that women still have to fight for in the 21st century. It can be argued that there is still much work to be done to bring equality to all aspects of Irish women’s lives.

We hope that Mná100.ie will bring the stories of these women to new audiences through the medium of film, podcast, articles, exhibitions, photo essays and webinars. The website will offer another online primary source to serve as another resource for people of all ages who have an interest in this period of commemoration.

During the Decade of Centenaries Programme, we have witnessed widespread engagement with events of the past, all across the country, which can be described as a renaissance of contemporary memory making.

100 Years of Women in Irish Politics and Public Life

Enjoy this Virtual Tour of the Pop Up Women’s Museum. 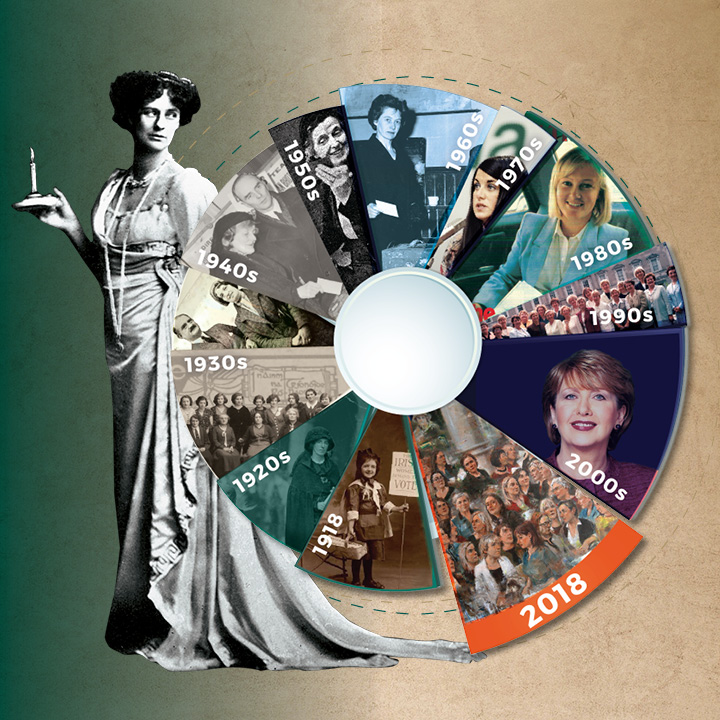